These following stats are board wide in the area that serves the REALTORS® Association of Grey Bruce Owen Sound. Monthly figures below are compared with the same month in 2010.

June: units sold down 14.3% and average price was UP for second consecutive month at 5.2%

September: units sold were down 5.8% and average price was slightly up 0.6% 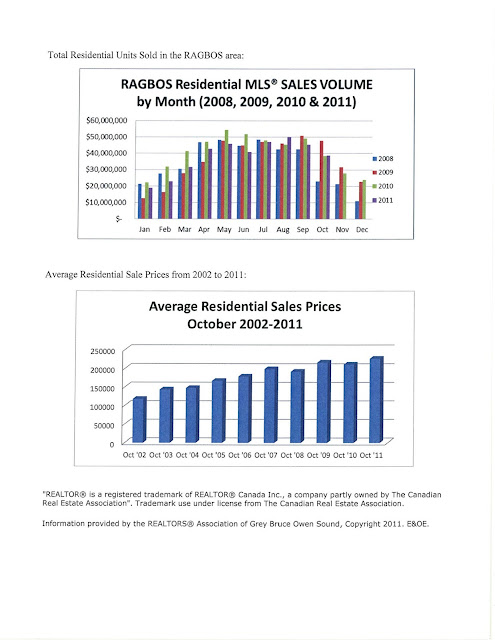 REMEMBER THAT THESE STATS COVER THE ENTIRE BOARD AREA. FOR SPECIFIC LOCALS, PLEASE DON’T

HESITATE TO CONTACT ME FOR FURTHER INFORMATION.
Posted by Unknown at 1:59 PM No comments:

REAL ESTATE BROKERAGE LOCATED IN COLLINGWOOD. JASON STEELE WORKS AND LIVES IN PORT ELGIN, ONTAIRO. You can reach me at 519-377-2147 cell or text

Some Testimonials from Clients

Below are just some of the opinions my clients have expressed in testimonials. Full versions can been seen on both of my websites. http://www.jasonsteele.ca/ or http://www.greybrucearea.com/

* It has been my pleasure to have Jason as our Realtor. He is one of the most out going and hard working agents that I have ever met...........

* Every single meeting, conversation, email or phone call that we had with him was conducted with integrity and professionalism..............

*We were so pleased with your services that we offered you a letter of recommendation at the time you represented us...........

*It has been our pleasure and good fortune to have contracted Jason Steele as our realtor.........

*I appreciate all of your time and effort Jason. You have been, by far, the most knowledgeable and most honest real estate agent I have yet to deal with (anywhere)..........

*An understanding that finding the right buyer is not a matter of simply lowering the price. An excellent level of service at all times, even at times we did not expect it.......

The opinions on this blog are that of the writers. Readers are cautioned to verify the information before using it for their purposes. Jason Steele is a Registered Real Estate Broker in the Province of Ontario, Canada. For all of your real estate needs, contact Jason Steele anytime.